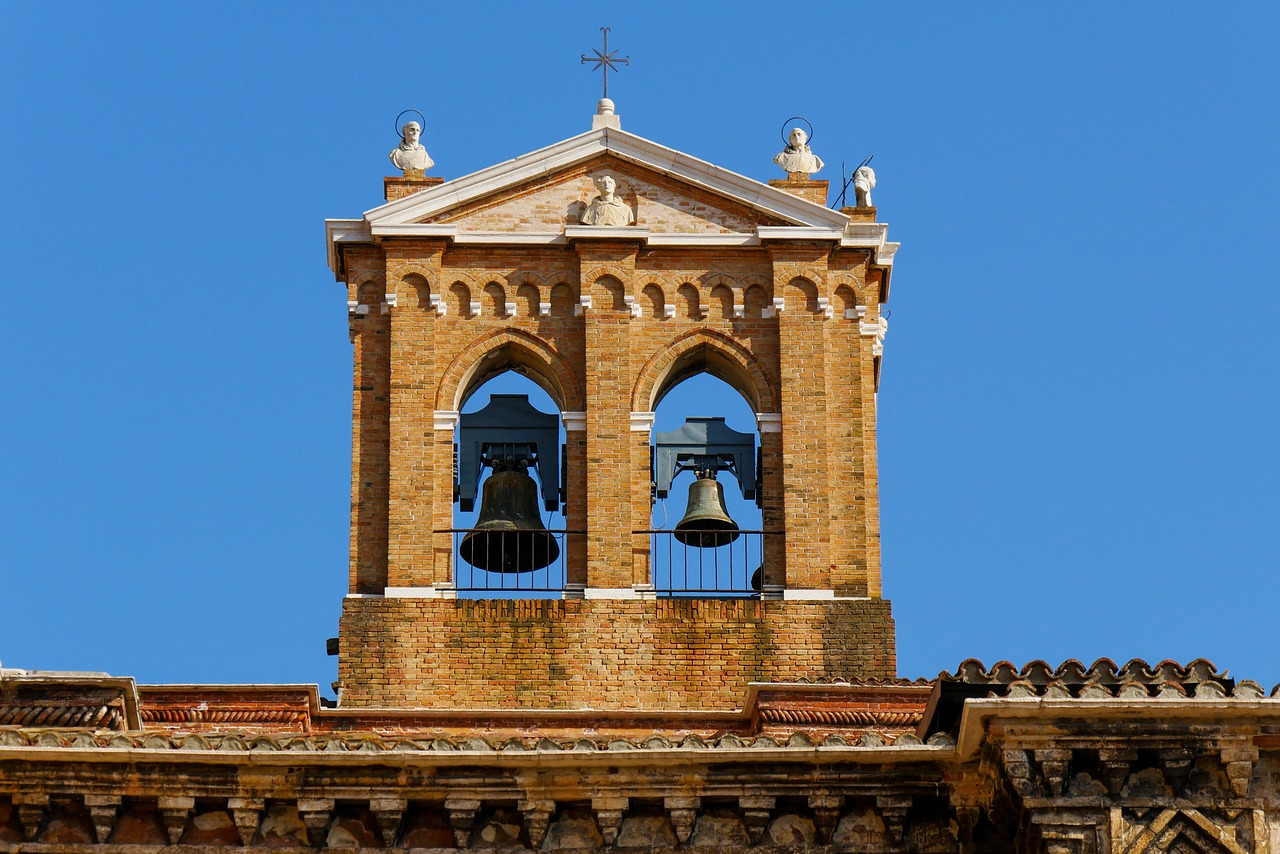 The Death Knell Bell Does Toll for Queensland Adjudication

From 2005 to 2014, there was rare consensus in the Australian Building and Construction Industry. Of all the State and Territory Security of Payment Acts, most industry representatives considered the Queensland Building and Construction Industry Payments Act 2004 (BCIPA) to be the most effective at achieving the Objects of the Acts. Expressed generally, the Objects are to help contractors and subcontractors be paid promptly for their work by providing effective, efficient and fair processes for securing payment. The policy advisers for the Queensland Bill had consulted widely across Australia and distilled the best outcomes from the lessons of other jurisdictions.

In March 2012, the Campbell Newman Liberal National Party (LNP) was elected to government winning 78 of the 89 seats. Amongst the first decisions of the new Cabinet was to conduct a parliamentary enquiry into the Queensland Building and Construction Authority (the enquiry recommended the abolition of the Authority) and a review of BCIPA. The review was not claimed to be independent. It was conducted by a barrister regularly engaged by the government, party activist and the current LNP member for Fisher in the Federal Parliament.

The amendments to BCIPA were a disaster to the Objects of the Act. The Labor Party described them in the following terms:

This is a dog’s breakfast of a bill that should not have been introduced in its current state. The Labor Party cannot and will not support such slip shop legislative processes and policy development. The fact that this bill was introduced raises serious questions about the minister’s competence and about the quality of cabinet consideration under the Newman Government. Because of the many severe deficiencies contained within the bill, the opposition will be voting against it”. (Member for Redcliff, Mrs D’Arth on 10th September 2014).

With the election of Labor in January 2015, there were high hopes that the BCIPA amendments would be undone. Instead the most unfortunate of the amendments continue, albeit government has repealed BCIPA and replaced it with the Building Industry Fairness (Security of Payment) Act 2017 (BIF).

The BIF Bill attracted close scrutiny during the November 2017 election, particularly in relation to the introduction of Project Bank accounts. Labor retained government and proclaimed commencement of BIF on 17 December 2018.

The new BIF was accompanied by a new Adjudication Registrar who BIF requires be legally qualified. Section 154(2) of BIF gives the Registrar certain functions, including ‘referring adjudication applications to adjudicators’ and ‘collecting statistical data and other information relevant to the administration of the registry for the commissioner’s report to the Minister under section 157’. Both these equivalent provisions were contained in the amended BCIPA from 2014.

Last month’s article ‘The Decline in Queensland Adjudication 2008 – 2018’ discussed the decline in the number of adjudication decisions from 754 eleven years ago to 202 decisions in financial year 2017 – 2018. There I expressed regret that the ‘Figures for last financial year 2018/19 are not available as the Registrar, despite a requirement to publish monthly statistics, has not published since December 2018’.

This practice was endorsed by the then relevant Minister in a parliamentary statement on 10 September 2014 at page 3176. ‘…the QBCC will publish the appointment of adjudicators and adjudication decisions on its website on a daily basis’

In passing, I note the Registrar has not challenged my statistical analysis or the conclusions drawn.

The industry should be concerned that the Registrar has reduced our capacity to analyse the performance of the adjudication process. I, with others, am intently interested in whether BIF will reverse the decline in the number of adjudication decisions. The Registrar denies the decision to cease publishing monthly statistics is related to close scrutiny of those figures. She says the decision results from her view to perform ‘no more or no less’ than her statutory functions. She refuses to say whether the Minister endorsed her decision or was made aware of it.

The number of adjudication decisions under BIF has dropped dramatically from the appallingly low numbers under BCIPA. The decided amounts awarded to claimants under BIF is a trickle of the low BCIPA statistics.

Tables 16 and 18 disclose an abject failure to recover monies under BIF. This will result in many unnecessary industry insolvencies. 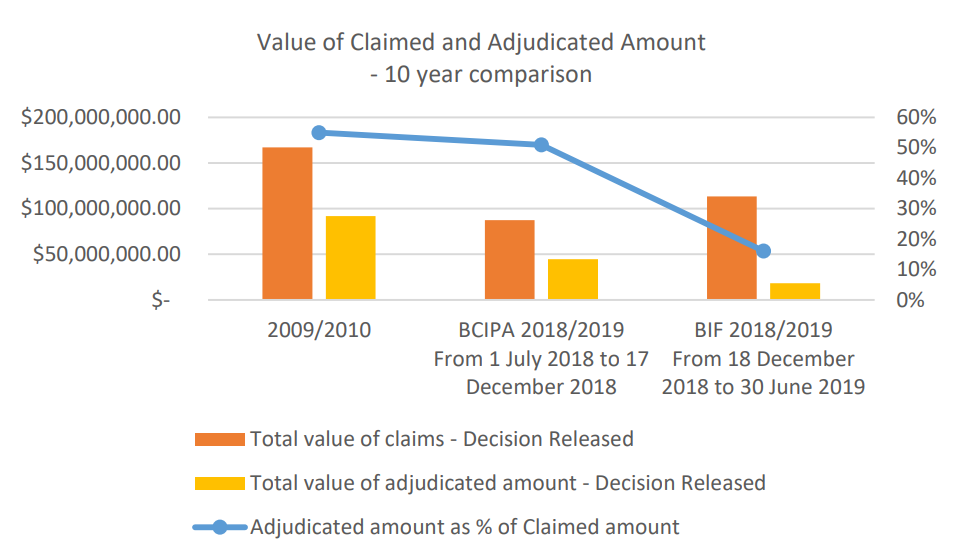 Such figures cause the death knell bell to toll for Queensland adjudication.

We no longer have access to monthly statistics to cross check the number of adjudication applications and decisions made. Historically, there has been close correlation between the monthly and annual figures published (maybe a difference of 2 – 3 matters).

However, the total decision numbers of 300 published in the Commission’s annual report for 2018-2019 does not marry with the number of decisions published on the Registrar’s website. The website publishes only 290 decisions of which 77 found no jurisdiction. 44 no jurisdiction decisions under BCIPA; 33 under BIF. In the absence of monthly statistics, it is impossible to know which set of statistics to accept. However, analysing the raw data available from the published decisions, there were only 213 (290-77) decisions which decided the disputed payment claim issues. This is a reduction from 720 decisions 10 years ago.

In passing, I note there is no legislative requirement for the Registrar to publish adjudicator decisions. I hope this article does not lead to the end of our last remaining regular source of information.

I ask the Registrar to reconsider the decision to stop publishing monthly statistics.

BIF in Queensland now represents the least effective of the Australian Security of Payment Acts. In a future article, we will expand on this statement by comparing BCIPA/BIF adjudication outcomes with other States, including an examination of the respective State fall over rates.

1 The fall over rate is the ratio of applications withdrawn to decisions that decide the disputed issues between the parties.
2 For the last 5.5 months of BCIPA, the fall over rate actually exceeded 293%.